Coffee has become an integral part of every one’s life. From a high school teenager to college student to a CEO of a multi-million corporation, we all consume coffee at regular intervals.

While some may see coffee as a harmful drug with long term disadvantages, many see coffee play a paramount role in their lives.

A research has shown that coffee can help protect against several hazardous diseases such HCC, a type of liver cancer, diabetes, and Alzheimer’s disease. Many researchers have called coffee an anti-disease wonder drug.

Coffee can protect against such diseases due to its high level of anti-oxidants which are absent in other products we consume every day.

Nowadays, the market of coffee continues to grow but what may come as a shock is that children as young as two are consuming coffee.

A research published in the peer-reviewed journal named Pediatrics shows that caffeine is the most popular drug among kids. This even by surpasses alcohol.

The dissemination of coffee consumption between the age groups of 2 – 22 grew up to 24 percent by the year 2010. Contrary to the popular belief, which beholds soda as the sole contributor of caffeine among kids, caffeine consumption via coffee is on a continuous rise.

Caffeine consumption through soda drinks, on the other hand, is on a significant drop. This has occurred due to several reasons, but primarily because of the negativities of soda. Soda has been labeled as a health nightmare, including all diet sodas which still contain harmful ingredients.

In the early 1960s, soda was considered to be healthier than coffee, an alternative accepted by the masses, but soda is now considered a major cause of obesity, heart disease, diabetes and numerous other problems.

On the other hand, research has proved coffee to be healthier for individuals.

Today coffee has disseminated throughout U.S.A, primarily because of joints like Starbucks, McDonalds, and Green Beans selling good coffee drinks. These joints are easy to access and their produce hugely popular among teenagers and adults of all ages.

Children consuming caffeine through coffee is becoming a norm in the society. However, not all believe that coffee is produce meant for kids. 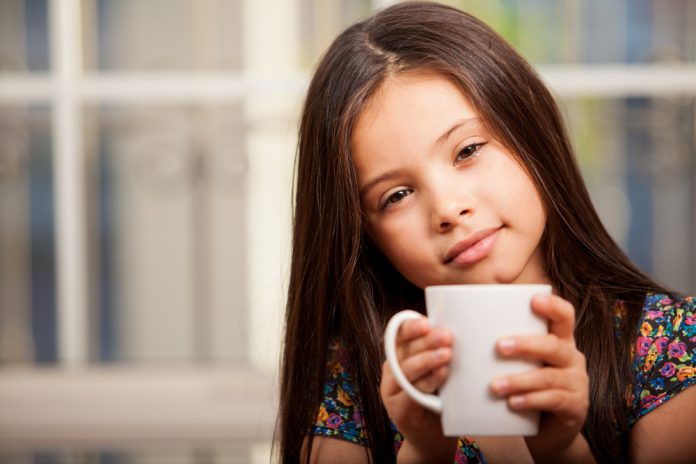 “Caffeine is a stimulant and can have significant effects on adult. When it comes to children a lot of care must be taken”- says strength coach, nutritionist and Houston Chronicle columnist Brandon Mentore. He said caffeine causes stages metabolic dysfunction and distortion before their body gets a chance to stabilize on its own, which can lead to life long struggle, needing years to rectify.

He believes that coffee should be consumed once in a while rather than at regular intervals. He further says “what is known is that coffee can affect sleep, children may develop cavities from drinking coffee especially drinks, and it can affect bone growth”, he further added “it is recommended that coffee consumption in children be limited, if not avoided, because it often replaces other much healthier drinks, such water or milk”.

Coffee has its own pros and cons. Consumption of coffee can help reduce stress and it can act as a protective shield against several diseases, it must also be noticed that coffee consumption is meant to be for a certain age group.

If coffee is excessively consumed by children, it can prove to be detrimental to their health. Even coffee replaces much harmful drinks such as sodas, it must be taken in a limited manner that it benefits the individual, rather than doing some harm.

Coffee is a major source of caffeine, which is an addictive substance, and therefore its consumption must be monitored. There is absolutely no reason that kids under the age of 12 should be consuming coffee. Once they reach adolescence, there is no evidence to show that coffee will do them any harm.