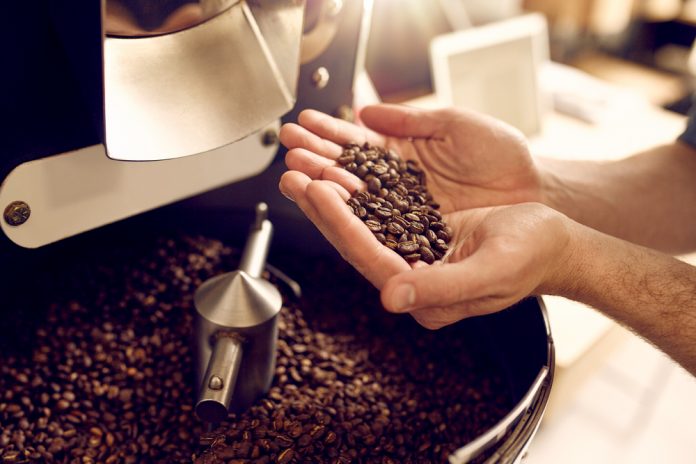 Roasting coffee is the method by which the physical and chemical properties of green coffee beans is changed and turned into the roasted coffee products.

Fundamentally, it is the roasting process that gives the beans its flavor.

Nowadays, a lot of people have started roasting on small-scale commercial level. There are many coffee lover who still roast coffee at their homes, but small scale coffee shops have to do it commercially.

The main step of roasting the coffee beans is performed after coffee processing, and before coffee brewing process.

When doing it on massive scale, the bags of green coffee beans can either be opened by hands or by the machines.

After that, they are thrown into the hopper which removes any undesirable particles. Those beans are then weighed and sent to the storage hopper.

From there onward, the beans are forwarded to the roaster. The initial process is endothermic while, in the end, it turns exothermic in nature.

After all the roasting has been done, the beans are carried from the roasting chamber to be cooled by the forcing air on it.

During the coffee roasting process, coffee beans loose about 28% of the weight mainly due to the loss of water. Although the beans tend to go through a weight loss, after the roasting process the size of these beans are almost doubled due to water vaporization, the release of carbon dioxide and release of volatile compounds.

In Vietnam, the beans are covered with oil and sugar before roasting. This produces an enriched caramelized coating on the beans.

The two most frequently used machine for roasting are hot-air roasters and drum roasters. Other uncommon roasting machines include the tangential, packet-bed and centrifugal roasters. Roasters can only operate in batch or continuous modes.

Drum Roasters are essentially the horizontal rotating drums that moves the unroasted beans in a hot environment. The beans can be heated by many ways including electricity, natural gas and many other ways as well.

In today’s world, the drums that heat the beans in an indirect manner are most widely used.

In these heated drums, the beans are heated from underneath the drum. While the other heated drum i.e. the direct-fired roasters roasts with the flame acting on the beans. This type of heated drum are less commonly used.

The second type, Hot-Air Roasters, forces hot air from a screen underneath the beans causing them to lift up a bit. Beans get the heat as they carry on tumbling.

The most common, yet the most inaccurate, way of telling about the profile of the roast is by seeing the color of the beans through the naked eye since the coffee beans also darken with time.

The beans shift their colors from yellow to dark brown, as it absorbs more heat. So one must properly observe the smell, temperature and the sound to detect whether a bean is roasted or not.

Among other factors, sound is a good pointer of the temperature that has been achieved in the roasting process.

Around 385°F the beans give the “first crack” sound which tells that the “light roast” has just started and then at 435°F, the sound of “second crack” is observed, which acknowledges us that the basic inner structure of beans has started to shatter.

If the beans are still granted to be heated after this point, then they will eventually get combusted.

The original flavor of the beans is purer as the roast is lighter. As the beans pick up darker color, it loses its true flavor and the flavors created by the roasting process originate.

Optimum environment has to be provided to the roasted coffee to extend its life.

Even though preservatives are added to prolong the shelf life of the roasted beans, we also need to consider the fact that the beans emits its own CO2 after the roasting process, so it is desirable to pack the beans in vacuum cans after the beans have emitted the CO2 gas.

Both refrigeration and freezing processes are observed to stop the staling of the coffee beans. While it is better to utilize the whole can of coffee as soon as possible that has been grounded.

Other Things to Consider

Many volatile organic compounds, particulate matter and combustion products are released during the processing of the coffee beans. The mechanisms like the roaster, cleaning, cooler and others processes are the major causes of the particulate matter emissions.

Since the roaster process is fired up by the help of the natural gas, there is an increased emissions of the carbon monoxide and carbon-dioxide gases because of the combustion and other pollutants namely: sulfur and nitrogen compounds, organic acids, aldehydes and alcohols are also emitted due to roasting.

Low amounts of volatile organic compounds are also released because of the drying, decaffeination and instant coffee extraction processes. While there are some emissions as discussed above that are released after packaging process that remain inside the cans.

While some facilities prefer the thermal catalytic oxidizers as they have low operating temperatures to acquire the required efficiencies, which are equal to the thermal oxidizers.

The use of catalysts indeed helps in achieving the desired efficiency especially for the systems that make use of the exhaust of the roaster connected to the burners. The sole purpose of burners is to heat the roaster. Emissions of the spray dryers are mostly controlled by the help of a cyclone which is then followed by the wet scrubber.